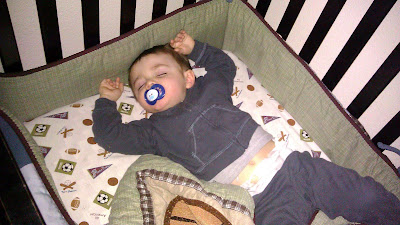 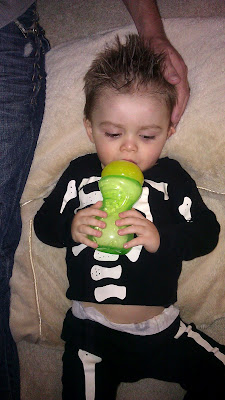 Well, its official! Hudson can go to bed without a binky and without crying or fussing for it. I have been dreading weaning him from it for months now. Derek and I had actually weaned him from it during the daytime about 4 months ago. That was easy enough, but two weeks ago Hudson got a little cold. Since he was extra fussy and not feeling good, I gave in for the week he was sick and let him have his binky all day long.... that was a mistake! Hudson had been attached to it ever since that week. He wouldn't even eat without having it in his sight. Lol! So, we decided together that since we had to re-wean him from it again any way, we might as well just do it all the way this time. I told Derek I was fine with doing it this weekend because Derek was home with me, and I wouldn't have to listen to him cry alone, and deal with him being tired and cranky alone. haha. Derek agreed that it was good he could be home with me for emotional support. So, last night we put him in his bed after bath and prayer time. He was in a really good mood. So I thought we might get lucky and just have him go to bed without missing his bink. HA! He was silent for about the first five minutes of laying down. Then we heard him wrestling around looking for it. After he realized it wasn't in his crib, he lost it. Broke my heart :(. Trust me, it was very hard to let him cry in his room knowing that I could easily make it stop by giving him his binky. But Derek kept reassuring me that it was for his own good. To help him develop his speech better. So reluctantly we let him cry himself to sleep for about an hour last night. I was sooo relieved when he finally fell asleep! He slept through the rest of the night perfectly. He was a little cranky at church today without his binky, and refused to go to nursery. When we got home, he was sooo tired and we fed him some lunch and put him down for a nap. He cried again, but only for about 15 minutes this time. That was a relief! ..... So tonight was the big test. I was worried that he would cry for another hour, but to our surprise, he didn't make a sound... we waited for him to start searching again, but nothing. Now it has been 2 hours since was put him down, and he has fallen asleep all alone and with no fuss. It took ONE night to wean him from it! I am so happy, and relieved, and proud of my baby boy! I can't believe how fast he is developing and growing everyday. He says so many sweet words now, and does new things all the time. I am so proud to be his mommy, and am glad I get to continue to watch him grow and learn. <3 <3 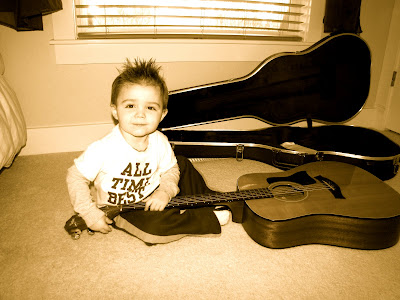 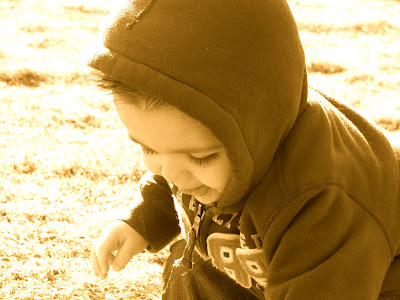 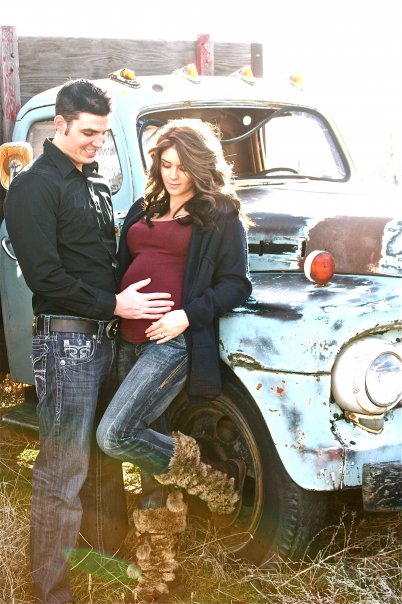